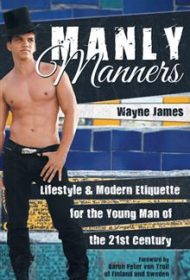 James, a Virgin Islands native, notes that he was “long groomed in the intricacies of polite society” from an early age. He attended Georgetown law school and, soon after, became a prominent New York fashion designer of upscale women’s clothing. In 2008, he was elected senator of the Virgin Islands.

Written in a sophisticated, yet conversational voice, much of the book (first of a trilogy) offers engaging information covering everything from table manners and wedding planning to building a gentleman’s wardrobe, with asides on the history of ties and skivvies. Other subjects range widely, from having an audience with the Pope to avoiding multicultural faux pas to proper etiquette when detained by the police and incarcerated. (It should be noted that James has personal experience, having been indicted in 2015 for allegedly embezzling funds and committing wire fraud while serving in the legislature. In the book’s Acknowledgements section he thanks his “fellow inmates” for their friendship.)

The book is highly informative and enhanced with detailed diagrams of place settings and the like. While the index offers quick reference, the table of contents is too spare, excluding the complexity of topics—but that’s a quibble.

The book’s explicitness regarding behind-closed-doors behaviors clearly marks this as a read geared most to open-minded young men. They will find a wealth of solid advice that is variously sophisticated, amusing and entertaining.