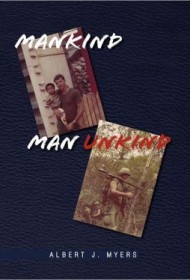 Mankind Man Unkind is a memoir of Myers’ military service in Vietnam. It begins with him arriving there in early 1968 as a 20-year-old Navy corpsman. Immediately after landing, as he waits for his flight to the combat base at Dong Ha, he watches as the bodies of 25 Americans are loaded off a C-130. It is a jarring moment. There are other well-told recollections: of a deadly battle when his unit suffered heavy casualties and he was wounded; of a bloodbath in which nine Marines were killed, some of them close buddies; of finding skeletal remains and a set of U.S dog tags while on patrol.

The difficulty comes in the overall structure of the book. Some parts of the 192-page book read like a soldier’s diary (“Rest assured, once I get home …”). Others are written from the perspective of 2011 (“I was so young, just twenty years old…”). The dichotomy can be confusing. Also problematic are grammatical errors, convoluted sentences, what appear to be editor’s notes that remain in the text and story gaps. One feels that Myers asked someone simply to transcribe his journal.

These things may be explained by an epilogue halfway through the book. Written by Myers’ wife, June, it reveals that Myers, at 57, is struggling with early onset Alzheimer’s, and that she has helped “finish the words written by Al so many years ago.”

Significantly, the second half of Mankind is devoted to vignettes and photos from the Third Marine Division Children’s Hospital, which Myers and his fellow soldiers built and funded during the last months of his stay in Vietnam. The stories, like the first half of the book, are choppy and leave questions. But they do convey a message of peace, mercy and compassion that’s often absent from war memoirs.