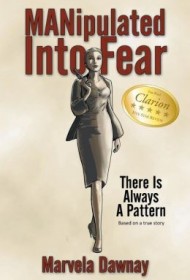 Although she met her future husband Rolf in high school, Marvela Dawnay didn’t marry him until she was 35. She then spent 13 years in a love/hate relationship, marrying and divorcing him three times before setting out for the ultimate revenge. In MANipulated Into Fear she exposes him as a lout, laboriously documenting substance abuse, prison sentences, gambling addiction, sexual perversions and a dozen other vices. Her goal? To write an inspiring book, and “to let others know who Rolf really is.”

Unfortunately, Dawnay falls down at both, reciting random details about her life like items on a grocery list: her daughter won a beauty contest; Rolf was shot nine times; they went on vacation. She includes blow-by-blow descriptions of their fights, her fears that he’s seeing other women and the sex that follows once they have made up.

The most gifted authors use such material to set the stage for a story about growth and development. They flesh out believable characters who have weaknesses and strengths; they use representative scenes that build to a dramatic climax, leaving readers with a deeper understanding of the predicament and life in general.

Here, the characters are absolutes. Marvela is a kind, loving, beautiful banker. Rolf is a psychopathic liar, addicted to the “f” word and crack cocaine. Their situations change little throughout the story, which numbs readers with repetitious conversations about drinking, fighting, banking and exercising. It’s hard to feel the impact of a tragic marriage when the description of a particularly vicious fight is followed with news that, because the couple had been walking regularly, “our physique really looked toned.”

At times, Dawnay’s story sounds as tawdry as those aired on daytime TV. As it turns out, that’s by design. Dawnay tells readers that she contacted Oprah and Dr. Phil, but never heard back. Instead, she bought a gun and wrote a tell-all, hardly the makings of the inspirational story she first aimed to write.