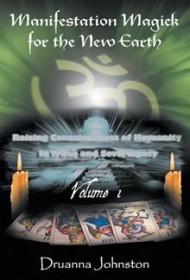 Imagine learning that you are more than you think, a person capable of discovering and manifesting your destiny with intention, will, and clarity of mind, body, and soul. Throw in some practical tools to direct your higher intentions and you have tarot reader and psychic Druanna Johnston’s Manifestation Magick for the New Earth.

Manifestation Magick lays out a practice in which practitioners consciously remove cards from the tarot deck based on what qualities they want to cultivate in their lives. After all, why just draw tarot cards for guidance when you can pick the one whose characteristics define what you want to focus on? Johnston adds to this work “tarot correspondences” where each tarot card has its associated astrological signs, runes, crystals, colors, gods and goddesses, and more. The author also includes original rituals and spells and explains how to work with the tarot, other modalities, and spell work in a progressive manner. Johnston’s voice is positive, conversational, and rich in personal anecdotes.

The book’s shortcoming is its organization. In the opening chapters, the book’s overall intention is not directly stated, and often the reader is left wondering how it all fits together. Johnston references the work of others without explaining succinctly why she is citing their findings, such as in Chapters 2 (“Who Are We?”) and 3 (“Enhancing Your Vibrations”), which muddles her message. Rather than placing these resources in the text it would help to have a “For Further Reading” section at the end. Also, the chapters on numerology and runes would be better placed with those on other corresponding tarot tools (such as crystals, colors, and herbs).

None of this overshadows Johnston’s original vision of using the tarot to manifest, not predict, and using other modalities with the tarot to deepen one’s intentions. Johnston’s book will be an important addition to any practical magick library, with special appeal for fans of Wicca, tarot, and The Secret.

Note: Johnston’s use of “magick” is rooted in the work of 20th century occultist Aleister Crowley but also harkens to modern Wicca, pagan, and other spiritual seekers’ spell work, most often toward positive or white magic goals.