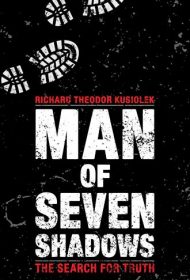 In Man of Seven Shadows, Richard Theodor Kusiolek presents an uneasy hybrid of history and fiction.

Kusiolek weaves a seemingly fictional account of the clandestine activities of the Korka clan, whose roots date back to the Neolithic age, with a quasi-historical accounting of 5,000 years of Eurasian history. The work begins with a description of the clan’s origin in what is now western Ukraine. The family thrives through the development of espionage techniques, evolving into a global criminal organization that operates in the present day.

Throughout this tale, the author offers accountings of major developments in western history, ranging from the rise and fall of the Roman Empire to the Stalin-Hitler non-aggression pact of 1939 to Trump-era goings on concerning Russia and Ukraine.

Unfortunately, Kusiolek’s work suffers from major deficiencies. First, it lacks a coherent structure, moving quickly across enormous spans of time and place. For example, in a chapter on Slavic historical developments, the author digresses to briefly discuss an unsubstantiated claim that Ancient Greece was run by a “hidden state,” which he vaguely connects to 19th century Crimean politics. Large swaths of historical information read as if written for a textbook.

The work’s fictional elements lack connection to its historical components. For instance, in the book’s nonfiction portion, the author presents a pro-Trump version of history, criticizing the premises and findings of the U.S. investigation into Russian meddling in the 2016 presidential campaign. Without explanation, however, the book concludes in an alternate 2019 in which a different U.S. president’s death is connected to shady machinations of the Korka clan.

Kusiolek’s work is also rife with typographical errors, and the endnotes do little to support its main arguments. The same holds true for the reference section, which includes citations to dubious websites and YouTube videos.

Kusiolek’s text lacks structural integrity and, at best, appears to be a combination of two tenuously connected attempts at fiction and nonfiction. To appeal to readers, it requires thorough revision.