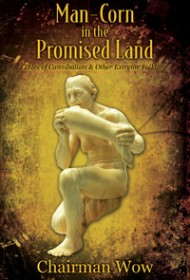 The poems and flash fiction of Man-Corn in the Promised Land comprise an ambitious collection that probes a wide range of historical, literary, and mythological paradoxes and atrocities.

The best examples of the author’s work are his short, incisive poems with a clear focus. For instance, “How Can You Trust a Poet?” begins: “Li Po was very drunk./ He tried to capture/ his own reflection/ in the water/and drowned.” The clean diction and thoughtful rendering of the life of this ancient Chinese poet culminates in a moving epiphany: “How can you trust a poet/ when he will do anything,/ break any rule,/ to bring more beauty/ into this world?”

Despite such strengths, “Chairman Wow” might want to reconsider the use of his pen name. Readers encounter his authorial persona with the following introduction: “Chairman Wow instructs that to become a true revolutionary of the heart you must first learn the wisdom of the stomach and not digest yourself.” Such a statement, and the name itself, convey the idea that readers should not take the work seriously, trivializing Wow’s finest moments of power and insight.

In addition, most of the pieces here move at such a frenetic pace that readers struggle to digest the sheer volume of allusions. There is little continuity between poems, such that readers experience a kind of literary whiplash in leaping from “2009-Roadside food stand in a border village in Nigeria on the highway to Liberia” to “1599 Scotland” in the next poem, for example. The author has much to gain by organizing his poems more deliberately—by time and place as well as theme—and paring down their frequent length and density. His works of flash fiction are long and dense enough to warrant a separate project altogether.

Nonetheless, Chairman Wow is a poet of promise with a compelling imagination and social consciousness. Readers will find many moments of interest in this varied, if often overwhelming, collection.