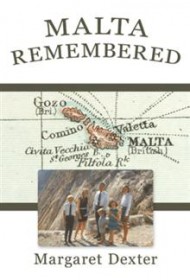 Margaret Dexter’s memoir of a year spent living in Malta is both a fond family history and globetrotting travelogue.

In 1963, husband Stillman’s business was booming and he decided the family should live in England for a year. They leased their Santa Barbara home and dove into the experience hungrily, arriving in time to see The Beatles before they were household names. Returning home, they found the business bankrupt and their own prospects grim. To rebuild a nest egg, Stillman took work that placed him in Libya. The separation from his family was too much to endure, so wife, kids and two poodles moved to Malta, which enabled frequent visits. They once again settled in and were loving life when the political climate in Libya forced the family to move yet again. Ever resilient, they packed up and made landfall (eventually) in Connecticut.

Dexter is an assured writer who is selective in choosing her anecdotes and curates them well. Her depictions of travel by train and ocean liner reveal the grit and glamour of both.

The author also captures her family’s quirky personalities neatly on the page. While living abroad, the family is used to being treated with friendly curiosity by neighbors. But when they settle in Connecticut, nobody seems curious about their time in Malta, and Dexter’s choice to bring home their right-hand drive Renault only makes things worse. “The wariness toward new people in their midst made us more than aware that we were those strangers with the weird car—and if Georg (the family’s standard poodle) sat beside me he appeared to be driving.”

By the time Stillman passes away from Parkinson’s disease, we know the family so well it feels like losing a friend.

Malta Remembered is a portrait of a place that is no more (the island nation has since joined the European Union), and a striking portrayal of a loving, close-knit family.