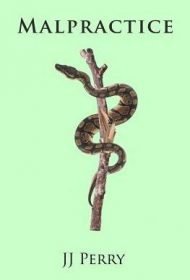 JJ Perry’s new novel explores the effects of a malpractice suit on the patient’s family and the doctors involved.

Sarah Thompson arrives in the emergency room with a heart condition. Hugh Harrison, a respected cardiologist, cautiously monitors her progress.  When Harrison goes out of town, however, his volatile colleague, Stan Blackstone, pursues a more aggressive course of treatment – with devastating results.

Sarah’s parents, steady Ed and difficult Myra, are left to care for Sarah’s young daughter, Amy, who has Down’s syndrome. Sarah’s ne’er-do-well ex-husband, Doug, also remains in the picture, hoping for a fat settlement from the malpractice suit that he, Ed and Myra have filed against Harrison, Blackstone, their practice and the hospital.

Perry’s background as a cardiologist enhances the story, lending realism to Sarah’s treatment and to the trial that follows. He couches his frequent use of technical medical terms in just enough context to aid general readers’ comprehension, while still making them feel like insiders.

Both Sarah’s hospitalization and the trial are well-paced and suspenseful. Less successful, however, is a subplot in which other members of Harrison’s practice scheme to maximize their profits, and in which Harrison turns whistleblower against them. Harrison’s adversaries are so cartoonishly villainous that it’s hard to take them seriously.

In fact, the novel’s character development overall is a mixed bag. The more sympathetic characters (Harrison, Ed and Sarah) are fairly well-drawn. Those whom the author clearly views in a more negative light, however, are reductive stereotypes. For example, Myra is an overweight slob who neglects both her health and her household in favor of television; Doug is a criminal lout who gets a butterfly tattooed on his disabled preteen daughter’s bottom, and Blackstone is a self-righteous fundamentalist obsessed with quoting scripture.

Malpractice contains enough good material to have some appeal for serious fans of the legal/medical thrillers. A sharper focus and improved character development, however, would help it reach a wider audience.