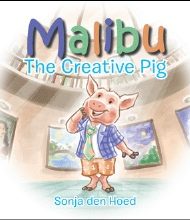 Malibu: The Creative Pig presents an illustrated children’s tale of a young pig whose artistic talents (and stroke of luck on social media) bring him global recognition.

Malibu is a young anthropomorphic pig who enjoys painting and aspires to showcase his artwork at the local gallery, even though his mother think his artwork is “MESSY” and his sister believes it’s “slapped together.” One day, he asks his mother whether his dream could ever come true, and she tells him it will happen—if he keeps practicing.

That very night, Malibu shows his latest painting to his father, who snaps a photo and shares it on social media. A few weeks later, Malibu gets a call from the gallery’s curator, who requests to show his work at their annual gala. He agrees and, after overcoming some stage fright, presents his portfolio during the gala. Shortly thereafter, Malibu receives so many requests for paintings that he spends all his spare time creating new work, becoming a “real, true artist.”

Malibu shows young readers that their dreams are worth pursuing. The story’s encapsulation of social media’s power also feels of-the-moment and relatable.

However, this inclusion also makes his success feel extremely convenient and too easily won. Although Malibu continues painting in the weeks following his father’s post, it’s an older piece that catches the gallery curator’s eye. Readers never see him grappling to improve his work in order to attain success. Indeed, it is his father’s action of posting something online that secures his recognition, rather than Malibu’s own initiative. That said, the story gives adults an opportunity to explore conversations about success with young readers by asking how else Malibu might have achieved his goals in the absence of a social media lightning strike.

While Malibu: the Creative Pig prompts more questions about success and talent than it answers, it remains a cheery story about goal setting and creativity.