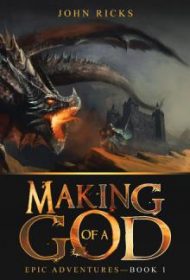 John Ricks combines a flair for Shakespearean-level intrigue with Dungeons and Dragons-style magic and fantasy in Making of a God, the first installment in his Epic Adventures series.

The narrative starts with the tale of the struggle between Charles and Droland, two princes of a realm “set in the days of dragons and magic, demons and the undead.”

At age 14, Charles’ noble, unerring character is already evident; his aim is not power or tyranny, but justice, service and dedication to his royal parents and their court. However, the royal family doesn’t see these virtues clearly, as Charles has been branded the “black sheep” of the family and must deal with all the suspicion that comes with that reputation.

Meanwhile, Droland’s aims are much more nefarious, which becomes obvious when Charles accompanies his mother, the queen, and other court members on a journey to the faraway Shadow Mountain to bless the new child of a duke. Droland sets into motion conspiracies to seize power for himself, a plot that results in an epic standoff that sends Charles into exile. What evolves is a hero’s journey that fantasy fans will find familiar. Charles develops a grand set of powers as he’s thrown into fights against demons, dragons and gods that will ultimately determine his fate.

As his Acknowledgements at the beginning of the book reveal, Ricks is a fan of the Dungeons and Dragons roleplaying series. Indeed, D&D veterans will feel like they’re reliving a campaign in certain passages, an approach that, at times, feels plodding and slow. Overly detailed descriptions of spells, magic and battles exacerbates the problem, particularly in the first part.

Even so, Ricks’ dynamic style and skill at spinning tales of royal intrigue compensate for the book’s denser stretches, and the story offers moments of real excitement.

The author’s imagined world of magic, monsters and court intrigue is a rich landscape. It offers promising potential of future tales to come.