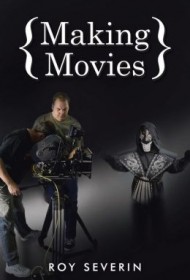 Middle-grade fiction is a tricky genre; kids reading at that level are able to decipher complex plots but aren’t yet ready for the heavy themes common to young adult books. Making Movies navigates this territory well, giving readers a flawed but earnest hero who never gives up and learns a lot along the way.

When Chad Sparks tries to become an extra in a ninja-themed movie, he ends up cast in the film and Hollywood-bound. While making friends (and enemies) among the cast and crew, he stumbles upon a mystery involving a shifty investor named Walter Buzzard and tries to bring the bad guys to justice. Not everything goes as planned, but Chad comes out a winner in the end.

Author Roy Severin writes with great tone and timing; mild gross-out humor and slapstick bits combine with enough background on financial investment and illegally dubbed movies (information important to a subplot) so that kids are entertained while absorbing the clues needed to follow the mystery. Scenes on movie sets are described in detail, and the fast pace and endless waiting between takes is a recurring theme. Chad is a ball of energy from page one, a trait that both helps and hampers him. A rivalry with his stunt double is funny and ultimately touching.

The book is largely free of typos but can use minor edits (trimming a few speechy moments and smoothing a plot point here and there) and a better cover design (the photo on the current cover is murky and confusing). But even as it stands, Making Movies is a well plotted and fully realized story that will find many appreciative readers.