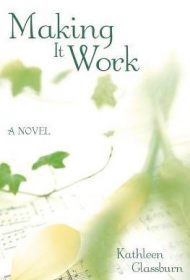 In Making It Work, Kathleen Glassburn pens an historical novel set in the Vietnam era about a young woman’s decade-long journey toward personal fulfillment.

In 1965, 19-year-old newlywed Sheila Gallagher puts her dreams of a music degree on hold when her husband, Jim, surprises her by enlisting in the Navy. Their move to Long Beach, California, from Minneapolis allows her to escape proximity to her controlling father, drunk mother, and wayward younger brother, but her new life poses other challenges.

Working a menial job at McDonnell Aircraft to make ends meet, she chafes at Jim’s desire to start a family before she continues her education. This disagreement, coupled with Jim’s desire to re-enlist upon his return from Vietnam and her increasing antipathy to the war, leads to their split two years later. Sheila then embarks on her own course that takes her across the country, supporting herself through assorted jobs and developing various personal relationships. With each step on her journey, she becomes increasingly resilient and self-confident.

Through a colorful cast of characters, including staid secretaries, military couples, swingers, and beatniks, Glassburn effectively illustrates the chaotic changing cultural times. Amid the turbulence, Sheila remains level-headed. Even when facing obstacles, she vows, “I will find my way!”. Her likeability advances the narrative despite a few too many ancillary anecdotes and flashbacks that detract from the storyline.

Glassburn writes plainly and cogently, inserting historical references throughout the text that illuminate her protagonist’s experience. For example, while Sheila is given a copy of The Feminine Mystique by a friend when she first leaves Minneapolis, she only relates to it years later when “Stories of women unhappy in their marriages and feeling oppressed made sense to her now.”

A thoughtful tale of a young woman’s journey of self-discovery during the late ’60s and early ’70s, this novel will particularly appeal to readers interested in the feminism of this era.