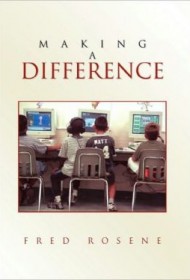 Making a Difference is the autobiography of a man who refused to succumb to an accident during college that left him paraplegic. In the 1950’s, when societal acceptance of and accessibility for handicapped people wasn’t the norm, Fred Rosene accepted his lot with grace, earned a masters degree from MIT, and enjoyed a successful career and independent life. The main focus of the book, however, is Rosene’s lifelong devotion to children and teens through the drop-in social center movement of the 1960’s, coaching sports, and volunteering in public schools after retirement.

The book offers three parts: Rosene’s early life through the time of his accident; the years developing and directing neighborhood drop-in programs; and his retirement years, when he used his vast computer experience to expand school technology programs in the 1990’s. Rosene furnishes copious particulars about his work with schools, all with his infectious enthusiasm.

The heart of the story is inspirational, as Rosene refuses self-pity and gives enthusiastically to others. One cannot help but be drawn to his tenacity and creativity. The book includes vignettes of many students Rosene worked with over the years, as well as generous discussion of how he and drop-in center coworkers addressed kids’ behavioral problems during the troubled 1960’s.

As a result, the author’s family, friends, and former charges will thoroughly enjoy this memoir. But for broader appeal, the book requires less extraneous personal information and a tighter focus on the youth work itself. Better organization is also needed (for example, the formation of the YAC youth program is introduced in Part I, then again in Part II as though it were new information), as well as some tweaks in tone, as when the author offers pointed criticism of specific people whose methods he disapproved of, in a way that detracts from the story’s spirit.

Despite these weaknesses, Rosene’s life of self-giving offers much to coax out the latent volunteer in us all.