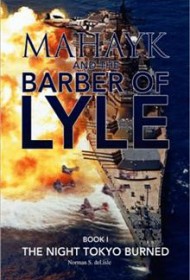 The story begins in Tokyo in 1939. We are not told the boy’s name, but that he is an award-winning prodigy in violin, not a popular instrument in Japan. The boy is exceedingly close to his mother, who encourages his love of music.

When U.S. planes firebomb Tokyo in 1945, the boy watches his beloved mother die a horrible death as flames consume the city and its people. Just 12 years old at the time, the boy lies about his age and becomes a kamikaze pilot (the author spells it “Gamigaze”) whose plane is shot down in Korean waters, where he is saved by a group of Korean soldiers returning home after fighting against Japan. An esteemed general who is on board insists on rescuing the boy and taking him in as his own. He gives the boy the name Mahayk. Ultimately, Mahayk immigrates to the U.S. seeking an education.

The primary obstacle to enjoying this novel is the author’s lack of facility with the English language. An example of the difficult prose: “Rampant destructions and relentless slaughters rage all over wholesale so cruel and swift beyond the sense of historic human dignity.” Some readers may find deLisle’s earnest style somewhat endearing, but there are other problems with the manuscript, including the fact that the author deals only superficially with extraordinary events, such as how a foreign-born man can earn a bachelor’s and master’s degree in the U.S. without having studied the language.

A potential audience for this book might include veterans of WWII and the Korean conflict, but the confusing writing style means that only the most patient readers will make it all the way through to the end.