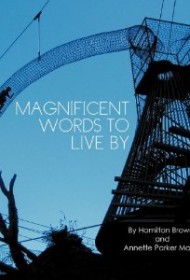 Magnificent Words to Live By is a small book of verse describing words starting with the letters A through Z. The authors’ aim, as noted on the back of the book, is to portray “the essence of words that are at the core of a happy existence.”

Each inspirational rhyme is set against a photographic backdrop that somehow echoes the theme of the text. The “effort” of E is pictured as a bee gathering pollen from a flower, while “ spontaneous” for S is represented by a dog leaping into a river. The cover image of what appears to be children climbing on amazing playground equipment, all viewed in silhouette, is from “imagination” for I — and suits it well. There are no credits on the photos, so the images are presumably from the public domain; however, they’re beautifully reproduced and well-chosen to connect with and enhance the words detailed here.

Magnificent Words to Live By is an attractively produced book. The verse, however, can sound a bit forced (“H stands for honor, displaying respect./ A show of esteem is the wanted effect.”), but it’s true to the style of much inspirational literature. And the authors do intend to inspire action, not mere contemplation: two blank pages at the end are offered for readers “to write down ways in which you intend to enact the essence of the words you’ve just read. Action helps to build comprehension.” Marching orders issued, readers can then get out there and start making a better world!

It’s not as visually wild or verbally freewheeling as Oh, the Places You’ll Go!, but Magnificent Words to Live By might be enjoyed by readers who find Dr. Seuss too frenetic. It is lovely to look at and encouraging to read and would be a thoughtful gift for anyone going through a difficult time or just beginning a new life chapter.