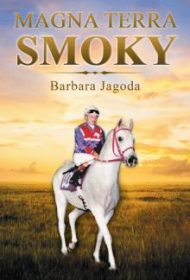 Magna Terra Smoky’s saga begins in 1988 on the Colorado grasslands, where the two-year-old Arabian posed a number of problems for his owner. He was shy, didn’t like or trust people and appeared untrainable. The owner neither liked nor wanted the horse, who seemed destined for an end-of-the-line auction where unlucky animals wind up.

Enter Jagoda, a former science teacher who was just getting into the training game. A friend of the owner, she bonded with the gray colt immediately, began training him, and eventually owned him. Over the next decade, she turned Smoky into one of the most celebrated and successful—100 first-, second- or third-place finishes in 120 career races—Arabian racehorses in history.

Magna Terra Smoky skillfully details this beautiful partnership. And a partnership it was. Jagoda, the novice trainer, often bucked tradition, such as when she opted for surgery for Smoky against the advice of experts—surgery that saved the horse’s career. For his part, Smoky responded to Jagoda’s coddling and loving care. He was a smart horse with a huge heart, a crowd-pleaser of the first degree. His career was in jeopardy several times because of injury and illness, most notably in 1992 when an infection cost him his right eye. But he returned to racing, less than two weeks later, and, of course, won his comeback race.

Jagoda is a talented writer who gives readers a close-up look behind the scenes. She keeps racing jargon to a bare minimum and also details her tribulations and the careers of several other horses she owned. They’re good stories, nicely told, but they can’t compare to Smoky’s.

The world of horse racing is inherently interesting. Jagoda takes it to the next level, delivering a book that anyone, not just racing aficionados and animal lovers, will surely enjoy.