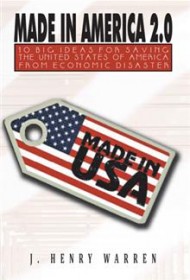 This short book presents author J. Henry Warren’s position on the decline of manufacturing in America and its resulting consequences – as well as his 10-point prescription to reverse the trend.

His ideas include familiar themes such as improving education, implementing deregulation, and rebuilding American infrastructure. But he also offers a more controversial proposal: the elimination of all taxes on U.S. manufacturers. He believes that this move, perhaps more than the others, will thoroughly revive the American economy.

Yet in presenting his plan, Warren cites some seemingly questionable statistics. He claims “… total manufacturing is down from 76% of our economy 30 years ago, to about 9% today.” However, The Manufacturing Institute has reported elsewhere that “the quantity of manufacturing value has generally kept pace with the overall economy for the past 61 years.” Warren doesn’t cite the source for his statistic.

The author can also be inconsistent. For example, while advocating deregulation, he criticizes the Clean Air Act Amendments of 1990, yet in his chapter titled “Buy American,” he states, “When you buy US manufactured products you know there are regulations in place to protect the environment.”

While honest and sincere, Warren’s writing occasionally reinforces stereotypes. He opines, for example, that unemployed people are “so used to being lazy they still won’t go back to work [after their compensation expires] so they freeload off of their friends and relatives …”

The author’s credentials are impressive – including degrees in economics and finance from the University of Pennsylvania’s Wharton School – and many of his suggestions are sound. He rightly stresses the impact of the Multiplier Effect: each dollar of manufacturing activity produces an additional $1.41 in economic spinoff. He also explains economic principles in terms understandable to lay readers.

While inconsistencies in his narrative needlessly confuse readers, Warren’s call for American economic renewal is laudable and many of his suggestions are well considered. Overall, his book offers an often-interesting, though uneven, reading experience.