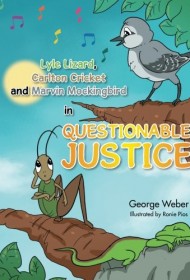 George Weber tells the tale of a cricket who takes his sense of outrage to an all-animal court in the children’s picture book Lyle Lizard, Carlton Cricket and Marvin Mockingbird in Questionable Justice.

Carlton Cricket has a problem with his friend Marvin Mockingbird: Marvin’s constant singing is driving Carlton crazy. When Marvin begins imitating Carlton’s own cricket songs, Carlton complains to Lyle Lizard, who suggests that he serve as judge and jury and hear both sides of the issue.

An impromptu court is set up, and Marvin is charged with mimicking and defaming Carlton’s love songs. But during the trial, Marvin demonstrates his singing ability, and all are impressed. With no relief to be found through the law, Carlton sadly retires to solitude — until his friend Marvin, realizing the pain he’s inadvertently caused Carlton, apologizes and all is forgiven.

Weber’s story has a solid backbone, and the fact that Marvin apologizes even though he’s considered innocent gets to the heart of the nature of friendship and compromise. There are also some cute and funny moments, such as when Carlton is called to state his case: “Do you swear…” Marvin jumps to his feet, “I object to profanity!”

Unfortunately, Weber’s execution overall is lacking. While the book’s color illustrations are solid, taking full advantage of the pages’ large dimensions, the story itself is hard to follow, with the author making frequent shifts from past to present tense, and back again and committing various other grammatical and technical mistakes. Weber also uses rhyme throughout the book, but the syntax and rhyming patterns are inconsistent and don’t always follow a discernible pattern. The plot tends to lurch about, rather than proceed smoothly.

As it stands, the book is too unpolished to recommend heartily. But with an editor’s help, Questionable Justice could be a pleasant tale with a worthy moral for young children.