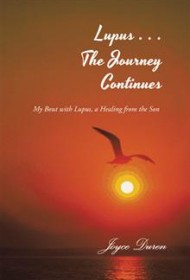 Lupus…The Journey Continues recounts Joyce Duren’s diagnosis and treatment for lupus and other ailments, among many other occurrences.

Duren writes in a hasty, stream-of-consciousness style about her employment history, two car accidents in which she was injured, various moves and a marriage and divorce. She was in poor health often and tries herbal remedies along with Western medicine while hoping for a cure rooted in her Christian faith.

All of this is hard to tease out from the text, which is awkwardly written and replete with grammatical errors. For example, she writes: “After completing the SSI application, seeing a state doctor in Inglewood, California [sic] not far from my home, telling from his comments he was not familiar with ‘lupus’ [sic] one of his comments ‘you just want to draw money for just a little pain.’ ”

Duren has kind things to say about a few of the people she’s met, but much of the book reads like a list of personal grudges she’s been waiting to air. A caregiver doesn’t show up one day and she crows about having put a gift aside for the woman that she doesn’t have to give her now. Jobs that went south, friends who didn’t perform to expectation, all provide fodder for complaint. Even her youngest son gets called out for taking too long to fetch something she’s asked for, which feels like a private grievance best kept between them.

A few chapters contain information about lupus, but Lupus…The Journey Continues sadly buries them under too much confusing and contradictory information to make the book useful to other sufferers.

Overall the errors, combined with a lack of focus, make the book slow going. Most readers will find the effort required to understand the text unrewarded in the end.