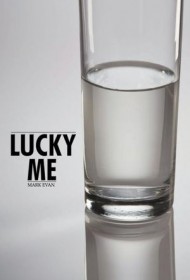 Mark Evan begins his provocative book, Lucky Me, with this premise: after years of studying odds and the ways of betting, he proposes to lead us through his Internet sports gambling system that will hopefully make him enough money to enjoy life with “a minimum of worry.”

It’s an interesting start – except that the more we read, the less we’re interested in gambling and the more we want to know about what led a seemingly bright, loving husband, father and successful businessman to take a series of extraordinary risks that almost destroyed all he loved through drink. And can this former alcoholic teach his own teenage sons –- one a former heroin addict who now relies on a steady diet of marijuana, the other leaning on pot to manage high school – enough valuable lessons to avoid repeating his mistakes? Evan, 56, is forced to confront these contradictions.

The author promises that his story is “100 percent true,” and memories of his drinking binges are certainly cringe-worthy: the $3.99 bottle of vodka that ultimately cost him thousands in legal and other fees; the day he left for a drink with a friend only to wake up in a roomful of strangers near the Tijuana airport. What might appear to be scenes from a buddy movie like The Hangover are nightmares that Evan recalls with both awe and remorse.

While his world might seem depressing, Evan easily engages readers through his compelliing honesty and humor, interrupted with observations about the current presidential election, Southern California weather, friendships, McDonald’s food, and God. Using a conversational style, he is nonetheless disciplined in his thoughts and words, keeping each chapter to just a few pages.

Oddly enough, Evan calls himself a grateful alcoholic — better from his experiences, despite the pain. Without them, he says, he wouldn’t have become the person he is today. Readers who enjoy similar memoirs will find much to like as they share in his journey.