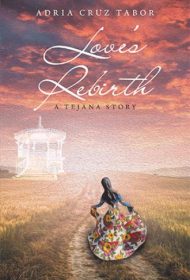 Set in the mid-19th century in a Mexican town in un-annexed Texas, this story follows the journey of a young woman with the gift of “Spiritual Magic” who, while searching for spiritual enlightenment, meets a stranger who has known her from another life.

When two-year-old Ana Dolores Peregrino is orphaned in what is reportedly an Indian raid – but actually involves “Americanos coming from the north” – a local doctor and his wife become her legal guardians. They quickly recognize that Ana is different from their other daughter, as she sees people as colors, essentially intuiting their auras. They keep this secret “lest she [Anna] be accused of witchery.”

As the story begins, Ana is not yet 16 but already “a capable nurse” in her father’s clinic. One afternoon, Ana hears a commotion, followed by the arrival of a cowboy carrying a woman wounded in a raid. Days later, Ana again encounters the cowboy—Texas Ranger Robert Hughes— as she sets out for an ancient spiritual site. He insists on accompanying her for her safety and tells her at the site that “…you and I follow the same road. We are of the same belief,” referring to the fact that both are “students of Spirit together in past lives” and to their belief in God and His gifts.

Although Robert leaves on a years-long mission and Ana marries, Robert remains in her thoughts. When tragedy strikes, Ana’s life is upended, leaving her to make peace with a new reality.

This is an unusual tale, blending New Age-style spirituality with the wild West setting. The spiritual element can feel pedantic at times, when characters discuss their beliefs, and the ending is rushed. That said, as the characters face trials, both personal and in the frontier landscape, readers will find a positive story of kindness, faith and love.

Love’s Rebirth won’t appeal to those uncomfortable with its spiritual ideas, but those who enjoy historical fiction and are open to such thought may enjoy this novel.