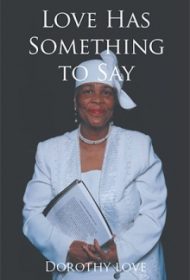 In Love Has Something to Say, Dorothy Love spins a warm-hearted autobiography of growing up in rural Arkansas and later in California after a terrible tragedy hits her family.

On Mother’s Day, 1947, the world stopped for Dorothy, the middle child of Lorene and Willie Love. That was the day her mother, two unborn twins and her two-year-old sister were brutally murdered in their tiny shack outside Waldo, Arkansas. Dorothy’s mother was only 24 years old when she died of an axe wound to the head.

Dorothy’s father disappears, and her grandmother takes on the task of bringing up the grief-stricken girl, her brother William, and big sister Maxine. Extended family and good friends pitch in to help.

But just as Dorothy is getting started with her young life in Santa Ana, singing lead in a popular all-girl quartet, she does “something stupid,” and becomes pregnant at 16.  As usual, her family rallies around her, but she never quite gets back on track, making one unfortunate relationship mistake after another.

Three marriages, four children, and many years later, Love offers this soul-baring book recounting her triumphs and travails, revealing intimate details about her life and loves, her children, grandchildren and special coworkers. She offers an unusually frank recap of abusive ex-husbands and unexpected angels who have crossed her path.

Written in a conversational, unpolished style sometimes tinged with angst and personal remorse, this memoir reads more like a letter written to the author’s children and grandchildren than to a mass audience. (“[G]uess what uncle [sic] Bill wanted to have, a get acquainted [sic] party for his nephew at his home. He got in touch with several of us to plan it and weinvited [sic] everyone.”) Typos and copyediting issues remain in need of attention.

Nevertheless, this memoir successfully captures the essence of one woman’s determined efforts to raise four children amid difficult circumstances. In addition, there’s a startling surprise ending worthy of the wait.