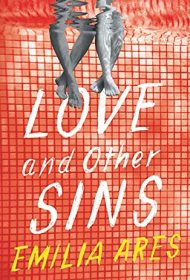 Love and Other Sins is a fast-paced young adult novel about two damaged teens connecting and learning to trust each other.

Mina is the daughter of Russian immigrants, a high school senior with few close friends but a passion for dance. Oliver is recently emancipated from the foster care system where he has been a victim of abuse. Both seek change, and, by chance, arrive at the same Los Angeles public school and where they share the same AP class. Their attraction is instant. But Mina’s long-absent father is in trouble with some Russian thugs who think they can get to him by threatening his daughter, and the trauma of Oliver’s childhood casts a shadow over everything he tries to do.

Told in alternating chapters from each main character’s first-person point of view, this is a well-paced, intriguing story. The author explores Mina and Oliver’s feelings and developing relationship against a background of threats against Mina and Oliver’s after-school business of buying and selling cell phones and computer equipment. When the pair skip school to be together, they incur the wrath of Mina’s mother, Lily.

The interactions between mother and daughter are a highlight of the book; their relationship features a clash between cultures and generations that also emphasizes, by contrast, Oliver’s loneliness and trauma. Both Mina and Oliver are sympathetic characters, although Oliver’s voice is less consistently teenage (i.e., at one point he tells readers “I ascended the branches of the fifty-foot willow tree…”) and it’s uncertain if he will be good for Mina, given his personal history and questionable side business.

Love and Other Sins ends on a cliff-hanger. It’s clear that there will be a sequel, but readers expecting a rounded novel will be frustrated at the deliberately abrupt end. This detracts from the overall success of the book, which otherwise offers a nuanced and slightly dark YA romance.