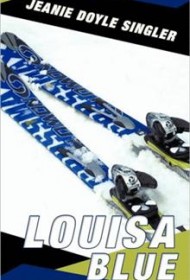 In Jeanie Doyle Singler’s Louisa Blue, Alexander LaGuardia, an illegitimate member of the Townsend family, stands to inherit a tidy sum if he can solve the mysterious year-and-a-half disappearance of his cousin, Spencer. To do so, Alexander must break through the reticence of Spencer’s wife, Louisa; figure out alliances among Spencer’s friends, and plumb the depth of animosity swirling though the wealthy family’s business dynamics.

And then there is the handsome Dark Ansgreth, Louisa’s chosen defender. He might not want Alexander sniffing around for reasons of his own. Is Spencer dead or has he simply escaped to begin a new life? Is Dark correct in suspecting foul play in his own wife’s death? Could the two scenarios be related?

Louisa Blue is a fast-paced mystery that fits neatly into the genre by presenting a puzzle within a small group of people. The story is well-paced, and Alexander’s musings are repetitious enough to solidify clues but not enough to be irritating. The characters are well defined, the plot proceeds logically, and the plausible ending is neatly tied up.

The beginning of the story, however, is confusing, with too many characters introduced too rapidly. One needs to continually reference the two-page character list while reading the first chapter. In addition, some character description is overdone, and the plot weaves seemingly disparate situations together a bit too neatly.

Despite such drawbacks to the narrative, Jeanie Doyle Singler’s mystery will have readers drawing their own satisfying conclusions once they figure out the complicated cast of characters.