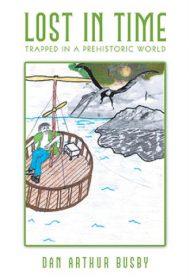 Dan Arthur Busby’s sci-fi adventure novel Lost in Time follows a futuristic convict’s adventures in the time of the dinosaurs and beyond.

In the year 2040, convicts face a creative and potentially frightening punishment: They are transported through time. Wrongly convicted of murder, Jimmy is condemned to travel back to the Cretaceous period. It’s a cruel twist of fate, as Jimmy initially helped invent the time machine, and such a sentence would ordinarily mean certain death, as dinosaur prey on humans. However, the man running the machine gives Jimmy a gun, allowing him a fighting chance.

In the Cretaceous period, Jimmy meets Rick and Glen, two other transported convicts. The three men team up to improve their immediate situation and find a way back to their own time.

The men eventually construct a time machine, but it proves difficult to control and lands them in some perilous situations, confronted by unfriendly inhabitants of unspecified times before their own. On their journey, they rescue a fourth man, Soto, from human sacrifice, and he joins their expedition. They finally land in a future society, which needs something only they can provide.

Dinosaurs and time travel are inherently fascinating subjects, and the idea of time travel as punishment is an intriguing twist on those familiar themes. Busby’s story, however, reads more like an outline than a finished novel. It features many exciting incidents, but lacks the connective tissue to bring the story alive.

For instance, there’s no character development to speak of. Jimmy, Rick and Glen don’t discuss their crimes (or alleged crimes), or what or whom they’ve left behind. The characters
progress toward their goals methodically, quickly resolving whatever obstacles they meet, engaging in strictly utilitarian dialogue. Likewise, most settings feel like mere sketches, existing only to advance the plot rather than immerse the reader.

In sum, Lost in Time has a promising foundation, but needs much more development before it will appeal to science fiction fans.