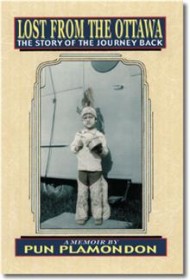 A life lived in resistance to authority is the theme of Lost from the Ottawa, written by Pun Plamondon, a man of many identities: wayward youth, union organizer, dope fiend, activist, journalist, philanderer, printer, radical, roadie for Kiss, bodyguard for Bob Seger, alcoholic and finally, after discovering his Ottawa Indian roots and finding sobriety, tribal elder. He is perhaps best known, however, for his place on the FBI Ten Most Wanted List during the ’60s.

Plamondon was born in a mental hospital to Ottawa and Ojibwe parents and adopted by a struggling non-Native Michigan couple. As he relates his tale of an American boy gone bad, he describes living on the streets as a youth, when he became involved in the anti-war movement, meeting radicals who founded and fueled such groups as Trans-Love Energies, Yippies and Hippies. He helped launch The White Panther Party, which eventually became the Rainbow People’s Party. Plamandon went underground in 1968, after being indicted on charges of conspiracy in the bombing of a CIA office in Ann Arbor, which landed him on the FBI’s wanted list.

Through simple, unembellished prose, we read of Plamondon’s court battles on various charges (a few trumped up). Subsequent court cases, detailed with little drama, range from unremarkable to landmark.

All of that sounds tremendously interesting as history, but as memoir, it lacks the personal insight and voice to hold a reader’s attention through the dozens and dozens of names, dates and places required to tell such a far-ranging tale. The story isn’t crafted for suspense or to draw readers into scenes. In his many interactions with women, friends, strangers, and family, we rarely learn enough about Plamondon to understand his motives–perhaps because, as he admits, he didn’t understand himself in his decades of drug and alcohol abuse.

Ultimately, Lost From the Ottawa presents an interesting slice of history, but the story isn’t moving enough to equal the 400-plus page commitment it asks of readers.