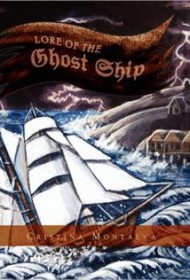 In this engaging story based on folktales and traditional life on the Chilean Archipelago of Chiloe, a 14-year-old boy is missing his mother. She vanished one night, and Pancho believes she was taken by the Ghost Ship, Camahueto.

Pancho has been hearing tales of the Ghost Ship from his uncle: the captain driven insane by the seduction and suicide of his beloved, his subsequent destruction of a church, and then the wreck of the ship in a terrible storm, which the deranged captain was in no shape to navigate. Because the captain had stolen the revered receptacle for the Host from the church, all on board are doomed to sail the ship forever.

The stories of Camahueto are interrupted by fascinating details of daily life in the fishing community, and there are charming sections depicting work and play on the archipelago. Then Pancho’s father disappears and Pancho realizes he has drowned and been taken aboard the Ghost Ship. In an exciting scene, with the help of the community, Pancho performs the rituals he dreamed about that can reunite the souls of his parents. Using Pancho’s magical nets, the souls of the pure ascend to heaven, while the impure return to the Ghost Ship, and Pancho forever becomes part of the legend.

This is a slim story, and the simplicity of the telling makes it appealing for younger readers. However the implied rape of the Captain’s fiance may render it inappropriate for some ages. There are also a few confusing passages that require a second reading to understand fully.

That said, author Cristina Montalva does an excellent job of weaving together legends and superstitions into a compelling narrative that reads as traditional folklore. The magical world and life on the island are organically linked and lead to a satisfying resolution.

BlueInk Heads-Up: Lovers of folktales and libraries interested in expanding their collections of multicultural titles, particularly Latin American, may be interested in this book.

Regional Interest: This is a tale of Chilean traditional life and folktale written by a Chilean author (now living in Canada) based on her grandmother’s stories.