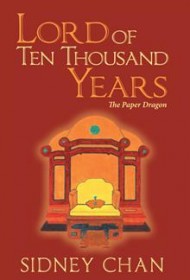 Sidney Chan’s debut historical novel, Lord of Ten Thousand Years: The Paper Dragon, dramatizes the demise of the Ching Dynasty, the last monarchy to rule Imperial China at the turn of the 20th century. Well-written and intriguing, the story delivers compelling portrayals of the era’s real-life imperial rulers and the political power plays they contrive to consolidate authority as rebellion and war imperil the royal court.

The novel begins in 1899. Emperor Kuang-hsu, age 28, has been exiled from the imperial palace in Peking by Empress Dowager Tzu-hsi for agitating for reforms to bolster China’s weakened economy, fortify its military, and westernize its system of government. Although Kuang-hsu has no real power—day-to-day governing matters must be approved by Tzu-hsi—Tzu-hsi knows Kuang-hsu’s revolutionary ideas have some support, thereby threatening her rule. Languishing in illness and depression on a remote island far from Peking, Kuang-hsu yearns for the unlikely moment when he will regain the throne and improve his country’s state of affairs.

Beyond Peking, political unrest spreads throughout the provinces, and foreign intervention from France, Germany, Japan, Russia, and the U.S. provokes anti-foreigner sentiment among the population. Tensions escalate when violence against foreigners turns fatal and Western governments seek justice for their dead.

An avid student of Chinese classic literature and history, Chan brings drama and life to the period. His succinct, clear prose captures the court’s pomp and majesty and contrasts skillfully the empress dowager’s ruthlessness and iron-fisted grip on power with the emperor’s delicateness and vulnerability.

A minor flaw rests in some of Chan’s Boxer Rebellion and Siege of the International Legations passages, which briefly pull readers out of the accomplished character-driven narrative in favor of historical text. Chan overcomes this misstep quickly, and readers will easily forgive the distraction.

The epilogue hints at a sequel as “a new day was ready to dawn in a city called Wuchung.” If so, it would be a welcome companion to this fine debut.