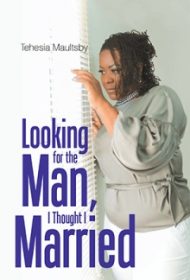 Being deceived in love is a tale as old as time. In Looking for the Man, I Thought I Married, Tehesia Maultsby revisits this theme, relating how she met and married a man who turned out to be a monster.

Maultsby describes giving a man her number, then being stood up on their first date. When he calls days later and she asks about his absence, he lies, saying he had been in a car accident in which someone had died. She goes out with him the next weekend, offering no explanation of why she agrees to this.

Things devolve rapidly from there, and she often includes the words “red flag” as asides, to emphasize troubling events. In one, Maultsby tells of lending this man her cell phone, only to discover, when he returns it, that some contacts have been deleted. When she confronts him, he says he had simply been looking up his doctor’s phone number.

Despite such red flags, they eventually marry. The only clue as to why are the expensive gifts he plies her with as she gets deeper into the relationship. It quickly becomes clear that he’s a possessive paranoid—a man who chokes, kicks, slaps her and holds a knife to her throat. At one point, Maultsby’s boss gives her a CD containing information about her husband. She describes reading it and screaming—but never shares what’s on the disk, noting only that her boss paid for the information “to know what was coming to my place of business and pretending to be such a loving, caring person.” Finally, when her husband kicks their dog and threatens to kill her, she forsakes the creature comforts and escapes.

Readers will wonder how much abuse is worth enduring in exchange for gifts. They are also likely to be frustrated by the many unanswered questions the author raises and will wish for a more complete and coherent narrative overall.