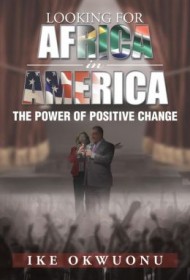 As fables go, Ike Okwuonu’s Looking for Africa in America takes the long and winding road.

It’s a tale of empowerment that reads longer than its length because it pivots between fact-based angst (a fatherless teen must battle racism while growing up on the mean streets of an urban city) and conjectural fantasy: what might it be like to be welcomed home in royal fashion? That means you’re nearly halfway through its 100 pages before you realize that it’s actually a morality play.

Okwuonu champions his philosophy – that getting in touch with one’s roots can only strengthen one’s journey through modern life – by telling the story of Johnson, an angry American black teen, who finds his redemption when he opts to travel to his great-great-grandfather’s ancestral village in Africa. Once there, he is greeted by the king and inducted into tribal life through sundry ceremonies. He learns that his distant ancestor was a fierce warrior sold into slavery by another tribe. Finally, he learns that the greatest love of all comes from within one’s self.

Readers will know it’s a fable because Johnson is never given a first name, and characters appear at strategic moments to offer advice (Uncle Jo, Uncle Paul) without the slightest backstory.

Okwuonu describes himself as a mental health professional, which explains the book’s rather academic tone. The prose doesn’t so much sing as lecture, which, in addition to the somewhat confusing conceit, can make it hard to embrace.

The point of Looking for Africa is admirable: All races should look to their roots for strength and not let disillusionment drive them to anger. One only wishes it were delivered in a more polished way; the voice is generally rudimentary omniscient, and tenses (present? past?) change without reason. How easily bad grammar can derail a valid thought.

In this case it’s the messenger and not the message, which is well worth considering, that stumbles.