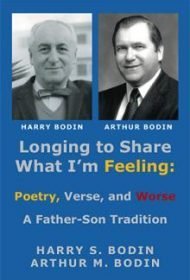 Two generations of men in one family share their writings in this collection of love poems, tributes and more that spans roughly 100 years.

The book begins with a charming Preface from Arthur M. Bodin, noting that the men in his family were not only encouraged to express their feelings, but “in fact,” this was “expected of all adult males at the celebrations of special occasions such as fiftieth birthdays and twenty-fifth wedding anniversaries…” After his attorney father Harry died in 1983, Arthur found files of his poetry. Here, he shares a combination of Harry’s and his own rhymed verse.

The book begins with 15 poems, puzzlingly with no attribution. The next section, devoted to Harry’s work, features nine chapters, including “Romance and Reveries,” “Love Songs to My Wife,” “Birthdays and Anniversaries,” “Special Occasions,” and “Verses for Friends and Grandchildren.”

Although many of Harry’s poems focus on family specifics (titled, for example, “To Alice,” “To RF,” “To Irma”), others have universal appeal. In “A Lawyer Looks at Life,” he offers his legal perspective humorously applied to life. “Life is an indeterminate sentence/ Imposed before a crime is committed,/ Sort of a superimposed repentance/ For sins that will someday be admitted.”

The poems are, by turns, fun, endearing in their expressions of unabashed love, and somber in their reflections of life’s passing years. Some strain to rhyme, but this is quickly forgiven in the context of the pair’s earnest efforts to please and entertain.

Most of the poems are polished and articulate, but this book’s limited focus on one family is its weakness. It may be most appropriate for friends and relatives of the authors.