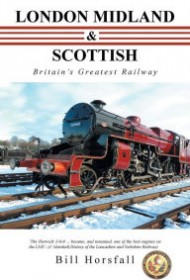 This exhaustively researched volume is aimed at railroad buffs forever stirred by the call of a train whistle and the scent of burning coal in their nostrils. In tart, restrained British prose, lifelong trainspotter Bill Horsfall chronicles the brief (1923-47) history of the London Midland & Scottish Railway—what he calls “Britain’s Greatest Railway”—a “lumbering giant” that in its heyday became the country’s second largest employer and a bulwark of the British economy.

It’s clear that Horsfall loves every mile of track, every belch of steam. He details things such as valve-gears, locomotive wheel-configurations, and company policy (“The LMS code for the Skipton shed was 20F, but the BR-regime changed it to 24G on the division of the Leeds area (20A)”) with abandon. While these passages can be tedious, Horsfall erupts, often enough, with vivid anecdotes that recall the romance of the rails.  He writes of George VI riding in an air-conditioned, armor-plated railway carriage during World War II; freight-yard workers stealing coal to heat their homes during the Depression; and of fellow railway buff Arthur Kinder, who, when faced with an important choice in 1928 between loving trains or his fiancée, remained a bachelor for the next 68 years.

The book could use some ruthless editing: its long lists of old locomotive numbers, detailed descriptions of storage sheds, and so on, are unlikely to intrigue even the most fervent buff. And it cries out for maps to complement an album of vintage black-and-white photos at the back of the book.

But at his best, Horsfall proves an able and evocative historian. He remembers a proud LMS crew being awarded gold watches after touring a grand British locomotive across North America in 1933, and writes, stiff upper lip, of seeing ruined trackbeds along abandoned old routes in the 1970s: “And so the wheel turns full circle, one might say.” Indeed, one might say.