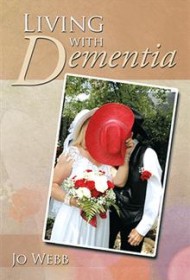 When Jo Webb, a divorcee for more than 40 years, finally reconnected with the love of her life in 2008, she had no idea that her happiness would be so short-lived. Two years later, her new husband Bob, a high school sweetheart from the 1950s, began showing signs of memory loss and was later diagnosed with Alzheimer’s disease. In Living with Dementia, Webb strives to show others what it’s like to struggle in the dual roles of wife and mother to a man who can no longer take care of himself.

Living With Dementia is a diary that spans Bob’s final days. It only partially achieves its goal, as at just 41 pages, it often seems more like a disjointed essay than a book. Gaps in time — Webb sometimes makes no diary entries for months — create a disconnect with the reader. While these lapses are understandable, as Webb had her hands full taking care of a spouse with Alzheimer’s, readers will likely be left wanting more: more details, more emotion, more storytelling.

Nonetheless, buried within Webb’s often-understated prose are heart-wrenching statements that startle readers with their simplicity. Early on, she describes a short errand that allows her to escape the cruel irony of her newlywed life. In this way, she notes, “[W]e can pretend we are living a normal life that married couples take for granted.” There are other insights, too, such as the realization that she is having the same experiences her father did while caring for her mother.

Although brevity keeps the book from having the depth that most readers will seek, this slim volume could serve to let caregivers with similar challenges know they are not alone. And Webb’s poignant confession, “I am missing my soul mate already,” is a short but powerful wakeup call reminding us to appreciate what we have before it is gone.