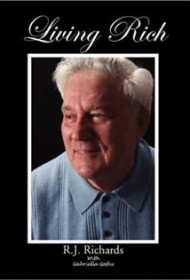 Living Rich, R.J. Richards’ quaint, brief memoir, is overflowing not with money, but with optimism and love. A retired Wisconsin grocery store manager, Richards recounts a poor childhood in a family so close that in their 20s his siblings helped each other build homes close together. Life was “carefree” and time “eternal.” Mother hung linens outside to dry regardless of season or temperature, and “their fragrance was the motif of my home: comfortable, sweet, and uncomplicated.”

Richards is an appealingly sensitive family man. With the effective guidance of co-author Gabriella Gafni, the book “speaks to my creative boyhood energy, the poet who hid his writings under a mattress” and is “a tribute to those… who made me who I am – and am ever becoming.”

Richards paints vivid images of his youthful self, failing at romance or stunned when a married friend tries to seduce him. The most important woman, though, was Mary, the divorced mother 10 years his senior whom he married at 26. “Every day I had a new opportunity to admire her,” he gushes. Descriptions of their 53-year union and her death are genuine and moving.

But the lack of conflict – childhood beatings by his father are mentioned but downplayed – ultimately makes a dull story. The otherwise upbeat early chapters include some foreshadowing, but the hinted discord never materializes. At the end of Chapter 2, Richards writes, “I never could envision how drastically life’s forces would assert themselves and change me forever,” but no such drastic changes occur. “My goals were as fundamental as my lifestyle,” he writes. “I just aspired to being the best at what I did and as upstanding in my personal life as the human condition would allow.”

Richards is extremely likable, a model for a graceful life and contented aging. But this book, accented with snapshots of relatives, is skewed toward his family and will likely be of little interest to general readers.