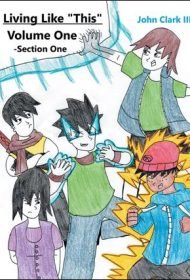 John Clark III’s artistic influences are clear in Living Like ‘This,’ the first section of the first volume of a graphic novel that tracks the exploits of a group of teenagers with extraordinary abilities.

This collection of vignettes about brother and sister Enmanuel and Autumn Summers and their compatriots Lynnwood Flores, Montrell Smith, and Hitomi Takahashi borrows from the American superhero comic book tradition. As noted in a brief intro, these young people owe their superpowers, like gravity, molecular and electron manipulation, to a “peculiar virus of unknown origins.” (The exception is Hitomi, who has no powers.) Their abilities allow them to control temperature, matter and other elements—talents that should seem familiar to any reader of standard Marvel or D.C. fare

Clark’s aesthetic style, though, owes much to Japanese manga and other Eastern graphic novel traditions. As he sketches out a series of stories—approximately 12 to 20 pages each—that see the teens tackling everything from replacing a scorched Thanksgiving turkey to battling monsters from other dimensions, his admiration for the Japanese aesthetic is clear.

The author’s commitment to paying homage to his influences gives this volume a charm, despite the somewhat simplistic nature of the artwork and the text. Each drawing is rendered in colored pencil on lined, notebook paper, imparting the feel of a narrative lovingly and painstakingly sketched out in a school notebook. The text itself uses a word processor-style font to impart dialogue and is hand drawn when using important action verbs (e.g., “Blast,” “Whoosh,” “Launch,” “Roars”).

The stories themselves are similarly straightforward, although the raw nature of the project can sometimes make it hard to distinguish characters and events.

The result is a volume from an artist still exploring his artistic philosophy and approach to narrative. The book can feel a bit primitive and simple, but it shows promise from an author who’s clearly dedicated to the genre and working hard to establish a unique style.