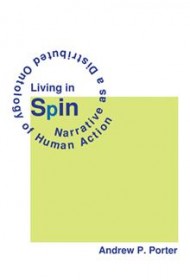 In Living in Spin: Narrative as a Distributed Ontology of Human Action, Porter presents an ontological study of acts. The study, he states up front, is an inquiry “in service of the goals in theology.” During his discussion, Porter covers philosophers from Aristotle to Kierkegaard, Heidegger to Ricoeur. Porter’s book is complex and will not be easily accessible to those without a background in philosophy.

One of the book’s major arguments is that in order to understand the being or meaning of an act, the act must be viewed within the context of its “narratability” [sic]. Rather than interpreting an act in terms of cause and effect, Porter proposes that it be understood as part of a narrative in which humans have a stake. How we view an act is dependent upon what came before and what is included in the narrative. Acts, in other words, “get their being only from the narrative choices made in narrating them.”

Whether a narrative is authentic or true depends on whether the choices of what to include or leave out were made responsibly. Ultimately, the choices must be made with an eye to the community and, ideally, according to Porter, with reference to the biblical Covenant and the Passion of Christ.

Although Porter’s arguments supporting narrative as a distributed ontology are insightful and comprehensive, his language is sometimes convoluted and opaque. With some work it’s possible to untangle this sentence within the context of its paragraph: “The relationship that relates itself to itself is constituted by much other, long before it is constituted by an Other.” But most readers will wish that Porter had couched it and similar passages in more intelligible terms. Nevertheless, this book may be of interest to those who have a penchant for ontology with an emphasis on Heidegger and Ricoeur.