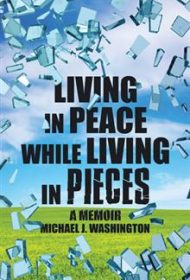 In Living in Peace While Living in Pieces, Michael J. Washington shares strategies for keeping calm during the storms of life.

Washington’s aim in chronicling his life is to reveal how having a positive attitude, extending grace to others, and placing faith in Jesus Christ fosters peace in any circumstance. He is sufficiently familiar with “the bad and ugly tremors of life that no one wants”: The African-American author climbed the corporate ladder with the weight of racial discrimination tied to his ankles, buried a young son he abandoned as an infant, watched his dreams of being a musician wither, and battled an addiction to crack cocaine. Yet, through it all, Washington managed to retain inner peace.

One of the greatest assets of this memoir is Washington’s transparency. He openly admits his faults, such as refusing to take responsibility for an unwanted child when he was 18, and lays bare the twisted thoughts of his once-addicted mind. This renders the book inspiring rather than preachy. His frank discussion of encounters with racism and his consistently humble attitude toward others enhances the narrative. Washington is the guy who didn’t have it all together, but through faith, grace, and a determined positive outlook, he remained content.

This book would have benefited from a skilled editor cleaning up typographical errors and tweaking the non-chronological structure, which is tricky for readers to follow. More detailed transitions between events would help readers clarify the timeline. Also, the first two chapters are somewhat verbose. Their content is crucial to establishing Washington’s strategies for peace, but may have had more impact had they been connected directly to the story’s action.

After a lifetime of struggle, a full career in meteorology, 40 years of marriage, and raising three successful children, Washington has earned the right to pass on his wisdom. Christians, addicts, and the African-American community especially will appreciate this unfiltered look at life, forgiveness, perseverance and faith.