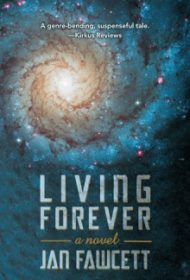 Jan Fawcett’s Living Forever commences with a thrilling proposal: What if consciousness could be maintained indefinitely by transferring a human mind to a computer chip?

The story’s protagonist, Dr. Ian Farrell, is diagnosed with a terminal melanoma and given several weeks to live. He is soon approached by several agents from DARPA (Defense Advanced Research Projects Agency) who offer him the intriguing mind-exchange proposal. They expect that his body will die in the process. Dr. Farrell agrees, thinking, “[d]eath is inevitable, this death that might advance knowledge…this is a rare privilege, given the available options.”

Unexpectedly, after the experiment is performed, Dr. Farrell’s physical body survives. He now exists in two versions, one on a computer chip (who takes the name Sunyata) and one in a physical body. This split drives the novel’s philosophical inquiry into the nature of consciousness and its relation to technology. The disembodied mind of Dr. Farrell asks, “Am I human? Do I have a soul…[o]r am I just a piece of high-tech equipment?”

The author also uses this premise to further a complicated plot in which the two versions of Dr. Farrell work together, alongside a super-computer and a computer scientist, to circumvent the potential extinction of the human race through the creation of “Hucomms”— human computers. The novel interweaves far-fetched plot elements, such as international assassins and terrorism, with “quantum mind” research, time travel and a love affair between the computer scientist and Sunyata.

At its best, Living Forever challenges readers into a meaningful inquiry into the nature of being. However, it lacks cohesiveness, as if one is reading two books simultaneously: a philosophical treatise and a science fiction thriller with too many moving parts. At 180 pages of text, the narrative simply can’t offer enough development to sustain all of its elements.

As a result, readers won’t find a completely satisfying reading experience, although they will enjoy some intriguing, thought-provoking moments.