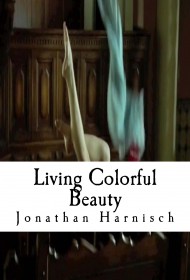 In 30-year-old Benjamin J. Schreiber, who suffers (like Harnisch) from schizo-affective disorder and Tourette’s Syndrome, the author has created a brilliant and memorable psychotic. In reckless Georgie Gust, he delivers a convincing alter-ego to whom Ben can transfer “my confessionary details, my sins, my fetishes.”  As in Alibiography, their destructive common fantasy is the cruel, manipulative siren Claudia Nesbitt. Their possible salvation? An insightful shrink called Dr. C.

Once again, Harnisch’s prose is simultaneously original and confusing: ”the words in my head have turned to salad,” Ben tells us, but “my imagination’s on fire.”  Careening between New York and Southern California, and even more wildly between the searing traumas of Ben’s childhood and the perilous uncertainties of his present, the narrative reveals a tormented soul who is “merely a spy, an observer, into the world of my hallucinations” but who can sometimes make peace with his demons. “Let me lose my mind,” Ben muses. “Fuck it. I’m going out for a walk on the beach. The beach is a block away. The voices in my head are raging. They’re calling me a winner.”

For Harnisch, who playfully calls himself “the king of mental illness,” writing fiction is clearly therapeutic. An editor character tells Ben: “The problem though is that your reader cannot possibly follow your train of thought,” and that’s often our problem, too. But the authenticity of Harnisch’s voice bursts through the tangles and repetitions of his language. He’s the real thing.