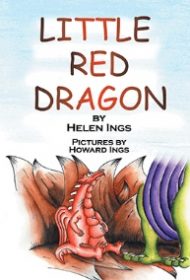 How did a small, red dragon become the star of the Welsh flag? Helen Ings’ rhyming picture book answers this question by introducing young readers to a red dragon named Dai.

Dai is the smallest and youngest sibling in a happy family of dragons. His five brothers and sisters each have unique features and an eagerness to learn how to fly. Only little Dai is born with red scales and wings that fail him no matter how hard he flaps, while his father looks on in despair.

One day, a man arrives in search of an image for the flag he’s creating. “It was green at the bottom and white at the top,/ but they all thought it looked rather plain./ Then the man looked at Dai/ with a glint in his eye./ His excitement was hard to contain!” In that moment, Dai’s destiny is revealed: He will fly for eternity as the mighty red Welsh dragon!

This is a breezy story with easy rhymes and read-aloud appeal. It would be improved had the author explained more fully why Dai was the dragon chosen for the flag. The story mentions that he’s ‘beautif’ly bright’ and a “perfect Welsh dragon,” but never explains why a dragon was the sought-after emblem, or why the other dragons, also brightly colored, weren’t considered for the honor.

The illustrations are engaging, but don’t always match the character descriptions; for example, Della is described as wearing a “sparkling pink diamond gown,” but the illustration is of a dragon with a pink stomach—no gown in sight.

The story also includes copyediting issues, with inconsistent capitalization at the start of stanzas and inconsistent use of commas at the end of some lines, as well as unnecessary use of ellipses.

Some revision would lend more polish and interest to this picture book. Still, Little Red Dragon is a lively read-aloud that young children may find engaging.