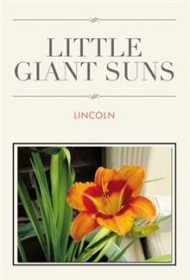 The setting of Little Giant Suns is the South Bronx, 1970s. Raised by his mother, author Lincoln (one name) never knew his father. He grew up in a community where heroin addiction and cocaine were prevalent. In this tough urban jungle, we sense that an engrossing story is about to unfold and want our protagonist to find himself and reach a better place.

Lincoln isn’t after success, wealth and fame; he’s seeking fulfillment, meaning, enrichment. In a brief introduction, he writes, “I saw life as an amazing adventure with so much to be discovered.” His short, honest and simply written book is about Lincoln’s spiritual liberation and awakening.

As a child, Lincoln was fascinated with the uniqueness of the human spirit. Like millions of other young men growing up in a ghetto, Lincoln didn’t have many choices, other than dealing drugs or joining the military. Lincoln chose the military (the Marines).

Written in an engaging, conversational tone, Little Giant Suns takes readers along with him on his journey from lawless ghetto streets, to the Marines, a brief dabbling in the rap industry, when he meets hip-hop legends Kid ‘n Play, Mc Lyte, KRS One, Biz Markie and others, and to remote corners of the globe after joining the Merchant Marines.

The text could have benefited from a meticulous edit. Often, the author writes in extremely long paragraphs; the narrative would read much smoother with more frequent breaks. But those who can overlook this stumbling block will find that the story flows nicely. The author doesn’t preach and offer up lessons and universal commandments. Instead, he delivers observations and, most importantly, his reactions to a world he views as mysterious and rich in self-enhancing lessons.

As such, Little Giant Suns is recommended for anyone interested in the path to personal growth, self-betterment and spiritual awakening.