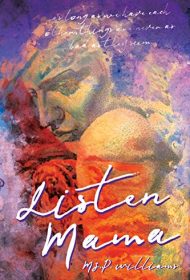 Listen Mama is comprised of author M.S.P Williams’ journal entries beginning at age 14 through almost 20 years of his life. He states that he has written it not only for himself, but also for his mentally ill mother so that she might have “a clearer picture of the world not seen through the false light of [her] mental illness.”

At six months, Williams was “somehow” poisoned at day care. Due to a hospital medical error while treating him, over 75% of his scalp and face were burned, resulting in severe disfigurement. Scarred and overweight, Williams was ridiculed throughout his life. He quips that he “hit the loser lottery.”

The author began working as a young teen to support his siblings and troubled mother (she shot and paralyzed an abusive husband, hosted transient boyfriends, and behaved erratically). His rage, he writes in one entry, “knows no limits.”

Despite all, he graduated from the University of Houston and held myriad jobs, from auto insurance assessor to police academy recruit. At times, he lived in his car, donating blood for income. Twice in his life, he attempted suicide. Ultimately, he made a break from his family, moving to California with his girlfriend, where he seemed to find peace.

Listen Mama is written in a conversational and brutally honest tone. Williams is unapologetic and candid in disclosing his feelings, allowing readers to sympathize with him. His frequent attempts at humor, however, feel forced. Of his first girlfriend, he banters, “she was naturally blown away by my easy, pretty boy ways haha.” His liberal use of “haha” and “lol” disrupt the text’s flow. Readers may also find frequent, unnecessary details of family, friends, and coworkers distracting.

Regardless of such flaws, readers will applaud the author’s heroic efforts to help his kin, all while feeling acute despair over his appearance and lack of confidence. His stark emotional journey is likely to strike a familiar chord with those struggling to live their own truth.