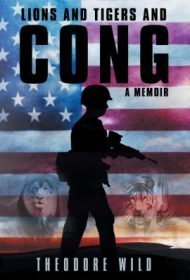 In Lions and Tigers and Cong, Vietnam War veteran Theodore Wild chronicles his 22-month service in the late 1960s.

Wild’s memoir begins when he arrives in South Vietnam as a young volunteer and ends with his discharge in early 1969. Instead of writing as himself, he adopts the persona of Jim Reynolds, a self-described “man of war” drawn to battle by a sense of timeless duty. Wild’s narrative tracks Reynolds’ journey from neophyte to warrior and highlights the bonds that develop among the grunts hailing from different backgrounds but finding commonality.

As Reynolds tries to survive physically and emotionally, he marvels at “the flexibility and the adaptability of the human spirit” amidst danger. While the war drones on, he increasingly sees the conflict as senseless and regrets the lives lost on both sides.

Wild follows Reynolds’ service chronologically. Through vivid details, he captures the daily lives of soldiers, describing the relative comforts of basecamp and the graphic horrors of the battlefield. Wild’s prose is at its most evocative when revealing Reynolds’ thoughts. At one point he notes: “The ground retched at being so invaded, and the earth shuddered in haste, in fear, at the things that men could so casually do.”

The narrative could be improved by tightening some chapters; italicized sections often veer off-track, alluding to Reynolds’ past lives or dreams. This doesn’t detract, however, from the raw power of the book’s portrayal of individual courage and camaraderie among troops. “Think about it,” says one soldier to another. “Five, ten years from now…you can drop dead, and none but family and maybe a few friends will give a shit. Die tomorrow, and one hundred and sixty guys will go on a rampage, shake down the stars, storm hell’s doors for you. Fucker, this is a sad, magnificent fraternity.”

This is an engrossing, harrowing account of war. It will appeal to Vietnam veterans, those interested in military history—and anyone who appreciates powerful, muscular writing.