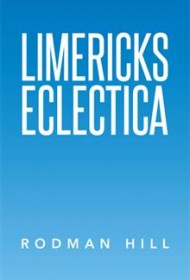 Limericks Eclectica is a collection of 304 limericks, a five-line form of rhyming poetry popularized around the turn of the 20th century in Ireland. While not widely celebrated in contemporary poetry today, the form — and this offering — allows for playful, spirited fun.

True to tradition, Hill’s limericks are frequently bawdy, epitomized at their best by #157, which reads: ““His sex life was weirdly exotic:/Ambidextrously autoerotic;/Then his right hand found out/What his left was about…/The jealousy drove him psychotic.”

Limericks have also been used historically as a form of social critique and political satire. Limerick #213 embodies the latter effectively: “Lyndon, Jimmy, Jack, Bill and Barack/ Put America on the right track;/ Dick, Ron and the Georges,/ Those political scourges,/Are guys Willie Mitt would bring back.”

While generally well executed, Hall’s work has some drawbacks. As evidenced by the abovementioned poem, the author often uses italics to show readers which syllables to stress in each line; this becomes extremely distracting, and the author’s italic choices are often baffling.

In addition, some of Hill’s limericks that target racial and sexual minorities are likely to strike contemporary readers as more insidious and less playful than others, particularly in light of current events that have brought racism and homophobia to the headlines. For example, a limerick like #212 is more likely to read as ignorant and offensive than clever and witty in light of contemporary social mores: “Even though they were sister and brother,/ A bi-gal and bi-guy wed each other;/ To add to their sins/ They also were twins/ With transexu’ls for father and mother.”

Still, limericks by nature are a form of verse that aims to raise eyebrows and violate social taboos, and Hill is, overall, a skillful practitioner of the form. While the collection would be more navigable for readers if it were organized into thematic sections, these poems are likely to find a devoted niche-audience among habitual readers of light, rhyming, and humorous verse.