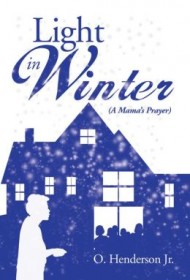 An archetypal American tale of suffering transformed by hard work and faith, Light in Winter (A Mama’s Prayer) has hope at is heart. Inspired by his own family, O. Henderson, Jr.’s somewhat crowded first novel takes on the ambitious task of chronicling one African American family’s migration from Missouri to Michigan in the 1930s, ’40s, and ’50s. As the Jefferson clan travels north, Henderson uses their story to celebrate the power of mothers to hold their broods together in tough times.

The folks at the center of Henderson’s tale are teenage mother Ruth, known as Babe-Ruth, and her hard-working but distractible husband Caleb. Their family expands by leaps and bounds over the years, as their fortunes wax and wane.

Although based on actual people from Henderson’s family, the author’s attempt to include every child, friend, coworker, preacher and boss too often removes the focus from the main characters, and thus makes it difficult for readers to stay engaged in their story. What the reader does get, however, is a whirlwind tour through three change-filled decades of American history. The Jeffersons go through some very rough personal periods, such as Caleb’s drinking binges and violent outbursts, and even one child’s suicide attempt. Still, it’s a prosperous time in America. As radio gives way to television, ice boxes to refrigerators, and tenements to suburban homes, the Jeffersons change with the times. This former farm family is able to rise on the waves of progress, with several children ultimately attending college and medical school.

Henderson puts it all down to Babe-Ruth’s tenacity and faith, writing that even in the worst times, her family “could feel a blanket of peace spreading over them, a light in winter.” Thus, the name of his novel, and the hopeful tone it strikes. While some readers will find the over-stuffed cast here frustrating, those who persevere will be rewarded with a rich view of a unique period in our nation’s history.