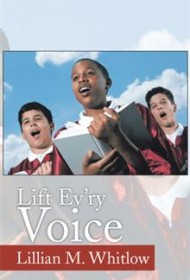 Lift Ev’ry Voice might have been titled “Heroes of African-American History” since that’s essentially what it is: a collection of brief profiles of notable African Americans from the 19th and 20th centuries.

The title is taken from James Weldon Johnson’s black national anthem (he’s included in the book). Each sketch runs between two and 12 pages, allowing us to glean such information as Harriet Tubman’s nickname (“Minty”) and the nature of her relationship with the abolitionist John Brown, while offering a perfunctory overview of the times in which the subject lived.

There are more than 70 profiles included, with a heavy emphasis on the arts (Bessie Smith, Langston Hughes, Michael Jackson) and social politics (Rosa Parks, Barbara Jordan, Malcolm X). Not all of the subjects are household names (consider Dr. Charles Drew, a blood transfusion pioneer), and one entry eschews a person for a period, the Harlem Renaissance.

Author Lillian M. Whitlow doesn’t offer any new information, but confines her research to synthesizing biographies, magazines and online sources. The result is a book on an explanatory level of junior high, with a narrative that fails to challenge accepted wisdom about its subjects, instead framing them in a near hagiographic light.

The book’s major flaw lies not in its character, however, but in the arrangement of its content. Not all entries have birth and death dates, only some begin by explaining the importance of the person being profiled, and there are more than a few copyediting mistakes. Equally curious is who was left out of the book, such as back-to-Africa advocate Marcus Garvey and early black film pioneer Oscar Micheaux.

Lift Ev’ry Voice doesn’t offer much in the way of depth or historical context, but readers will find it is useful as an introductory overview of black American accomplishment.