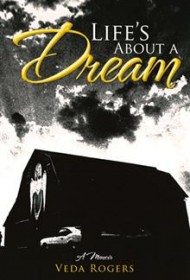 “This story is for anyone who has ever put his/her feet on stage,” is the apt back cover description for this memoir by one of the founders of the Vassar Playhouse, located at Pomona Lake, 35 miles south of Topeka, Kansas. Author Veda Rogers and her husband created a vibrant theater out of a country barn and lived their dream for 16 seasons, beginning in 1970.

The theater no longer exists, and so this memoir takes on an elegiac quality, but also an air of excitement as Rogers re-creates the couple’s daring and precarious enterprise. It will also hold interest for the sidelight it casts on Ginger Rogers. Veda Roger’s father-in-law was Ginger’s stepfather, a man who managed Ginger’s vaudeville tour for two years (1926-27).

Mainly, however, this is Veda Roger’s story, told in the third person – a wise choice because the narrative allows the author to get some distance from herself and to describe the other figures in her story without the cloying “I” that mars many memoirs.

As Rogers reveals, theater is hard work and rarely profitable. Even when situated close to a lake with lots of summer visitors, the Vassar Playhouse struggled to break even, and for many seasons ran in the red. And yet the lure not only of the stage but of the community that theaters build and serve is palpable in this book.

Life’s About a Dream would have been better if, perhaps, some of the details about family life were omitted, or brought in later, after the initial excitement of establishing the theater is dramatized. Shaving off some of the characters and exposition and focusing more intensely on the creation of the theater, its tenuous existence and its demise would improve the dramatic arc of the story. As it stands, though, the book will appeal to those readers who are driven to follow their dreams and willing to risk the consequences.