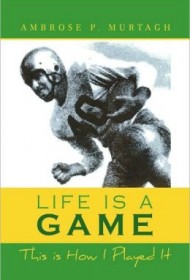 When lifelong New Yorker Ambrose P. Murtagh sat down at age 91 to write a memoir, he wisely concentrated on his turbulent youth and early adulthood. The disjointed anecdotes collected here cry out for a good editor and more reflection by the author, but the raw material of Murtagh’s early life is compelling.

Born in 1918 in Corona Heights, Queens, this Irish-American child of the Great Depression faced daunting obstacles–an unreliable father given to squandering his measly paychecks on drink; a pious, overprotective mother; a self-conscious stutter and the lingering effects of childhood polio, which drove young “Andy” Murtagh to constantly prove himself equal in dangerous sandlot football games, the amateur boxing ring and classrooms ruled by cruel, unjust nuns. He performed poorly in school before dropping out to support his family. He quit a seminary, made a few inept passes at romance and struggled for decades to earn a pair of college degrees and a career in credit management.

Aside from the shame of being designated unfit for military service in World War II, Murtagh writes almost nothing about the scars left by his various traumas. This could be by design, but it reads like avoidance. The result is a narrative that gives equal dramatic weight to his recitation of old college-course grades, the bland details of a 1950s canoe trip and the startlingly offhand revelation, barely 20 pages from the end, that Murtagh’s rosary-clutching mother had long ago expelled her boozy husband from their marriage bed and replaced him, for whatever reason, with . . . her beloved little son Ambrose.

Murtagh summarizes his tale of survival with an exhausted platitude: “You dig in, you play the game, every play, with everything you’ve got, and you wait for the breaks. Sometimes, miracles happen.” What a shame. The harrowing life story submerged in this shapeless memoir could have been gripping with a major rewrite.