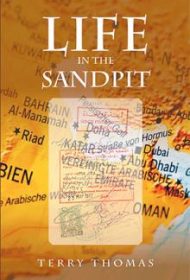 In this memoir, Terry Thomas relates one period of his life—the year (May 1977 to May 1978) he spent as an operations engineer in the oil fields of Saudi Arabia.

Thomas’ path to the Middle East started with an engineering apprenticeship with Britain’s National Coal Board. He subsequently worked in the steel and glass industries, at a nuclear power site and, as focused on here, as an operations engineer for an oil company.

The topic of working as a supervisor in the Saudi oil industry could translate into dry, technical stories and the intricacies of office politics that few would care about. But Thomas keeps that material to a minimum, instead combining a series of entertaining stories with his reflections on being a stranger in a strange land.

Although he never really warmed to Saudi Arabia, he did connect with the locals, such as the man who berated a merchant who was overcharging Thomas for some fruit, and the group of young boys Thomas would shoot marbles or play soccer with. (When Thomas was hassled by an overzealous police officer, the father of one of the boys led a mob that chased off the cop and rescued Thomas.) Thomas tells stories of solving dangerous problems in the field, and staying one step ahead of the Saudi religious police.

The chapters are short, easy to read, and largely entertaining, most often delivered with humor. For example, here’s his description of the critters he and his roommates shared their accommodations with: “Also inhabiting the bathroom was a lizard, about 15 centimeters long, who seemed to like eating the ants. Lenny the Lizard was allowed to stay, and you could pass the time whilst sitting on the toilet, chatting away to Lenny.”

The oil industry has changed dramatically over the last 40 years, but Thomas gives readers an interesting look at what things were like during his adventurous year in the desert.