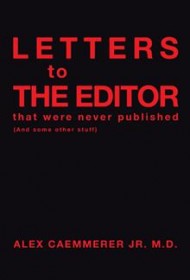 Most letters to the editor are not written and argued in a scholarly fashion. This isn’t the case with those that Dr Alex Caemmerer Jr. has sent over the years to publications such as the New York Times, Newsweek and Psychiatric News. Sacred cows make a better grade of hamburger on Caemmerer’s grill, as the New York psychiatrist skillfully skewers articles on everything from homosexuality to exorcism.

In his introduction, Caemmerer explains the genesis of his book: “I have become addicted to writing letters to the Editor of the New York Times, and have been fortunate enough to see a handful of my letters make it into print. At the same time, over the last decade or so I’ve written well over a hundred letters that were not published, so I decided to take advantage of the opportunities which now exist to get them into print by other means.”

In his letters, Caemmerer classifies evangelists as religious terrorists; gas-guzzling SUV’s as an embarrassment; and invasive surgery as something that should be used only as a last resort. He proudly admits that he’s an atheist and questions why the Catholic Church doesn’t baptize miscarried or aborted fetuses, since it believes fetuses, even at their earliest stages, are human life. Humility is not one of his defining characteristics, but his arguments are well-armed with medical and academic knowledge (though readers may find themselves wishing they could read the original articles he is referencing).

Caemmerer writes a short opinion piece preceding his chapters, which are divided into themes such as depression, religion, homosexuality, etc. His collection is engaging, thought provoking and employs humor so dry it’s arid. Like most letters to the editor, though, they are likely to convince only those who already lean his way on the issues, despite their erudition.